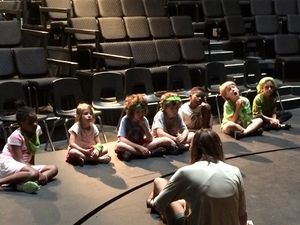 Curio believes in ensemble-based theatre-making. We retain a small company of actors, directors and designers and commit to their continued development as artists.

Curio Theatre Company began as a touring and outreach company composed of professional artists and administrators in the Philadelphia region before being incorporated as a non­profit organization.

Since 2004, our programming has consisted of productions and education. On average we produce four shows a year for the public. Beyond our productions, we also run a theatre school for the local West Philadelphia students, as well as a theatre camp that runs throughout July. In 2015, the Education Department introduced a new program called Curiositeens. This is a free program for local teenagers that runs throughout the school year, and offers the students a chance to go deeper into their theatrical training.

Note:  The above descriptive information came from the organization's Our Company page and its Mission and History page.