Difference between revisions of "Gershman Y" 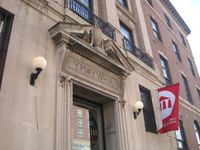 The Gershman Y is a vibrant arts and culture center located in Center City Philadelphia on the Avenue of the Arts. The Gershman Y’s mission is to be an urban community center informed by Jewish values that presents a broad array of arts, culture, and educational experiences for curious individuals of all ages. Committed to sharing the diversity and breadth of the Jewish experience, the Gershman Y welcomes people of all ethnic backgrounds and religious affiliations to explore, participate, and contribute to our rich roster of Jewish arts and cultural programs and community initiatives.

The Gershman Y traces its origins back to the Young Men’s Hebrew Association (YMHA), originally formed in 1875 to serve as a cultural, educational, and social meeting place for the Jewish community. In 1924, the YMHA merged with the Young Women’s Hebrew Society and moved to the corner of Broad and Pine Streets, where it remains today. Since then, the Gershman Y has been one of Philadelphia’s mainstays for experiencing a rich array of arts, cultural, and educational programs. In September 2009, the Gershman Y separated from the Jewish Community Centers of Greater Philadelphia, of which the Gershman Y had been a constituent site, and became an independent organization.

Since its independence, the Gershman Y has grown and thrived as a home for secular Jewish arts and culture. The Gershman Y has three areas of programming: the Philadelphia Jewish Film Festival (PJFF), changing exhibitions in the Y’s Galleries, and arts and cultural programs and events. The Gershman Y offers over 100 unique programs every year, including book readings, classes, holiday celebrations, film screenings, gallery exhibits, and performing arts events.

The critically acclaimed Philadelphia Jewish Film Festival (PJFF) seeks to educate and engage the Philadelphia cultural community, Jewish and non-Jewish alike, by focusing on films and programs that explore Jewish issues, history, and values. Currently in its 35th season, the critically acclaimed PJFF is the second-longest running series of its kind in the United States. The PJFF presents an annual Fall Festival and Spring Series.

The Gershman Y presents several art exhibitions every year, including art shows in all media and those dedicated exclusively to photography. The Gershman Y galleries aim to add new and innovative viewpoints and artwork to the already thriving artistic environment in Philadelphia and the surrounding areas.

The Gershman Y presents the Philadelphia community with high caliber arts programming that reflects and offers insight into the wide array of Jewish culture. By presenting its offerings in a variety of formats and mediums, the Y engages as many individuals as possible and shares this rich cultural history with the community. The Gershman Y’s programs continue to evolve as we examine and rethink Jewish arts and culture for a new generation of Jews who are seeking to define what it means to be Jewish and for everyone interested in learning more about this fascinating culture.