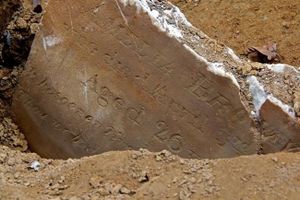 "In Memory of Amelia Brown / Who Died April 3rd 1819 / Aged 26 years / Whosoever live & believeth in me / Thou we be dead / Yet shall we live", reads a Bethel Burying Ground tombstone.

A number of years ago I became aware of a 19th Century African American burial ground in the 400 block of Queen Street in Philadelphia, Pennsylvania. I was not familiar with its existence and began researching its history with the expectation of finding a good deal of information, considering that it was purchased in 1810 by the prominent historical figure, Reverend Richard Allen, and the founding trustees of Mother Bethel African Methodist Episcopal Church.

I came to find that there was very little in the historical record about the graveyard and what was available was scarce, scattered and not user-friendly. My goal in creating this website is to do something toward correcting those shortfalls. Additionally, in the course of my investigation, I discovered that no records existed to document that the human remains were ever removed before or after the 1889 sale of the graveyard to the City of Philadelphia. The official church records went missing in 1850 and have never been recovered. An archeological investigation in July of 2013 found that the human remains were, in fact, still there and that the estimate of individuals interred was 5,000+.

These men and women laid to rest in this small cemetery were the pioneers who struggled and fought to successfully establish the first major free Black community in the North. This they did against murderous mobs, virulent epidemics and crushing poverty. In my opinion, their stories are vital because History does matter. At present, I have identified the names of approximately 2,488 Black Philadelphians buried on Queen Street and have arranged their names and personal information in the Bethel Burying Ground Name Directory.

Note:  The above descriptive information came from the organization's About the Bethel Burying Ground Project page.