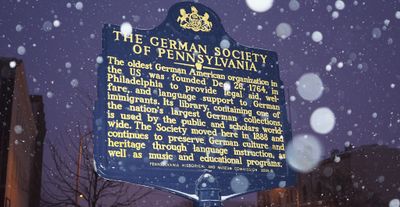 Connecting the Old World with the New, Since 1764

Between the 1680s and the American Revolution, the majority of an estimated 100,000 German-speaking immigrants coming to North America settled in Pennsylvania, making up a third of Philadelphia's population by the 1760s. These immigrants often arrived in a miserable state after long sea voyages known for unhealthy conditions. In response to their plight, on December 26, 1764, sixty-five prominent German colonists established an organization "for the relief of distressed Germans." During the 1800s, the Society continued its support for immigrants in need while also increasingly sponsoring activities to preserve and promote German traditions and customs.

As the 19th century progressed, the Society became more active in the promotion of German culture in Philadelphia. The mid-century spike in immigration became the impetus behind not only the Agentur, but also the Society’s involvement in celebrating events like Friedrich Schiller’s 100th birthday in 1859 and the 200th anniversary of the founding of Germantown in 1883. The library started to collect German-American publications, many of which, like the Demokrat and Freie Presse newspapers, were printed in Philadelphia. Today, its collections document the breadth of German cultural life in the city, such as large-scale celebrations of German-American Day as well as regional and national competitions for gymnastics (Turner), rifle clubs (Schützenvereine), and singing associations (Sängerbünde). Many of these events were held at the Society’s current home at 611 Spring Garden Street, built in 1888 in what was then the heart of Philadelphia’s German community. By the end of the century, the Society had emerged as a major cultural institution and promoter of Deutschtum, or “Germanness.”

During the 1950s and 60s, the Society became an important focal point for the effort to re-establish the German-American presence in Philadelphia, culminating in the 200th Anniversary festivities of 1964. The approaching 300th anniversary of the 1683 arrival of the first German settlers in Philadelphia sparked renewed interest on both sides of the Atlantic Ocean in the Society and its library, in the end allowing the Society to embark on an ambitious renovation project in the 1990s. Since then, the library serves as a research center for German-American studies, and an expanding language program as well as new social events like a popular Bierfest have made it possible to gain new members from the region as a whole, not only its German-American community. At the beginning of the 21st century, the German Society is well poised to offer cultural, social, and educational experiences to a variety of audiences.

Note:  The above descriptive information came from the organization's Our History page.