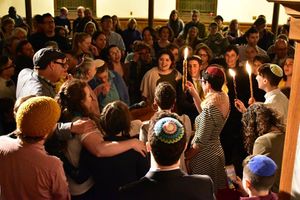 Kol Tzedek began as a dream shared among a small group of committed Jews living in West Philadelphia. They sought a community with which to pray, yet the last remaining synagogue had closed its doors in the 1980s. Rabbi Lauren, then a rabbinical student at the Reconstructionist Rabbinical College, worked with the core leadership on a vision for a full-fledged Jewish community in which people could gather, pray and learn, celebrate and mourn.

​The name “Kol Tzedek” (Voice of Justice) was chosen to reflect the belief that justice should stand at the center of our mission. Through our participation in POWER (Philadelphians Organized to Witness Empower and Rebuild), our work to make ourselves a green congregation, and much more, we inspire each other to make the world a better place.

Kol Tzedek aims to be a different kind of Jewish community--one in which all people, regardless of their backgrounds, beliefs or non-beliefs, lifestyles and orientations, would have a full voice at the "Jewish table." Kol Tzedek counts among its members spiritual seekers and secular Jews; interfaith families and Jewish-Jewish households; Jews by choice; Jews of color; traditional families, queer families, and single-parent households.

Note:  The above descriptive information came from the organization's Who We Are page.