Theatre in the X 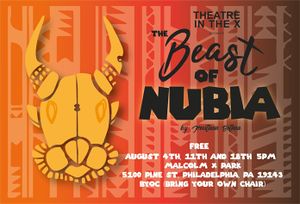 Theatre in the X provides the people of West Philadelphia and the African American community at large the opportunity to see professional quality theater in their own neighborhood for no cost. By removing the barriers of location and price the audience is able to experience theater that they possibly would not be able to access otherwise.
Theatre in the X 2013 took place with the support of a Leeway Foundation Art and Change grant. We presented two weekends of performances of Amiri Baraka’s historical A Black Mass in tandem with Nilaja Sun’s more recent No Child. We featured 2 directors and 16 actors ranging from high school students to seasoned adult actors.
With the support of the Performances in Public Spaces program and a second Leeway Foundation grant Theatre in the X 2015 was able to present three free performances of Othello in Malcolm X Park with an all Black cast, directed by Ozzie Jones. Presenting an all Black production of Othello allowed for the actors to embody roles that they normally would never be considered for with traditional casting. Although the show ran close to two hours, the audience was engaged throughout the entire show, and park goers who weren't in the area for the show stopped and joined the audience.