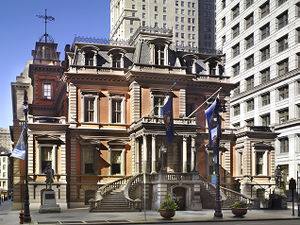 Welcome to the Union League of Philadelphia
Established 1862

The Union League of Philadelphia, ranked the #1 City Club in the Country, is a shining jewel of history in a city defined by such treasure. Founded in 1862 as a patriotic society to support the Union and the policies of President Abraham Lincoln, The Union League of Philadelphia laid the philosophical foundation of other Union Leagues across a nation torn by civil war. The League has hosted US presidents, heads of state, industrialists, entertainers and dignitaries from around the globe and has proudly supported the American military in each conflict since the Civil War. The Union League continues to be driven by its motto, Amor Patriae Ducit or Love of Country Leads.

Today, the Union League is home to over 3,500 men and women who contribute to club life and keep alive the League's traditions. As they did in 1862, today's members represent the Philadelphia region's leaders in business, education, technology, healthcare, law, government, religion, art and culture. The League's civic participation and philanthropic outreach takes the form of three charitable foundations: The Youth Work Foundation, The Scholarship Foundation and The Abraham Lincoln Foundation, which educate the public about our nation's history, recognize student role models in our region's schools, and provide scholarships to deserving students.

The League has three satellite facilities exclusively for members - The Union League Golf Club at Torresdale located in Northeast Philadelphia, The Bungalow, a private dining room, located in Stone Harbor, NJ and The Union League Guard House, a private dining room in Gladwyne, PA. Members participate in many League-wide events each year, including formal dances, dinners, speaker programs and outings, and enjoy reciprocity with more than 200 private clubs around the world.